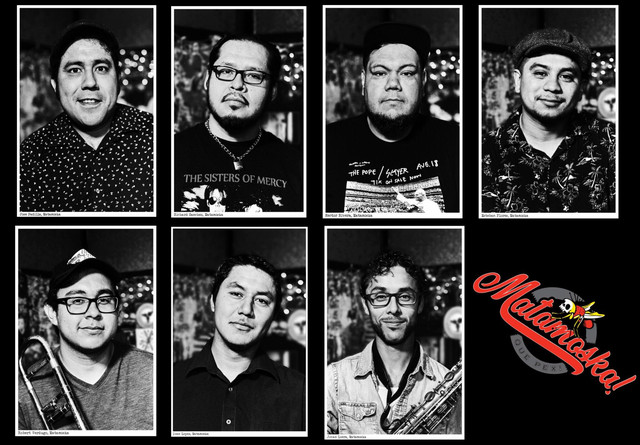 Formed during the infancy of Los Angeles’ ghetto Ska-Punk movement and considered “OG’s” of the current Ska movement, Matamoska has been gaining notoriety in the underground ska scene since 2000 for their signature mix of styles, sounds, influences, and languages.The current band lineup includes Jose Padilla (guitar/vox), Richard Sanchez (drums), Hector Rivera (bass), Esteban Flores (keys), Jovan Loera (tsax), Ivan Lopez (tpt), and Robert Verdugo (tbn), however they frequently enjoy having special guests perform such as original lead guitarist Jose Morales (Piñata Protest).Following the release of their demo tape entitled “Matamoska!: Ghetto Ska” in April 2001, the band developed a dedicated following, propelling them to appearances on LATV Live and performances at historic Los Angeles venues such as The Whiskey A Go-Go, The Coconut Teazer, and The Roxy. Although they gained local recognition, the band was able to backup legendary Ska acts such as Reel Big Fish, Voodoo Glow Skulls, The Slackers, Mustard Plug, Ska-P, and Los Pericos in venues as far north as Seattle and as far east as New York. Additionally, their singles “Problema Sin Solucion” and “Soledad” were featured on various Ska compilation albums such as Smelvis Records’ “Backyard City Rockers” (2002) and Obscene Records’ “Keeping the Spirit Alive” (2002).The success of their demo tape led to the production of the first EP entitled “De Verdad,” recorded in 2002 and released in 2003 by Obscene Records. Featuring five songs and a bonus track, an error during production caused the first 200 albums to have a red cover. After its release, “De Verdad” gained traction, including coverage in several fanzines and websites, and wide-spread internet based radio play, reaching areas such as Texas, Mexico, and parts of South America.Shortly after the release of Matamoska’s next EP “Problem Sin Solucion,” frontman Jose Padilla left the band. The band decided to experiment with different sounds and members, until eventually taking a hiatus from 2007-2010. Due to the support of the dedicated underground Los Angeles Ska fans, Matamoska made their long awaited return at The Knitting Factory in downtown Los Angeles, adding Esteban Flores (keys) to the lineup. The same year, the band released a live album including a new song that would soon become the band’s hit, “Beer Goggles.”With the new lineup together and the band eager to release new music after the positive feedback from “Beer Goggles”, the first full length album “M is for Murder” (2014) was released. Featuring songs such as “Night of 100 Frights” and “Chucky Tiene Chamba,” this self-produced album was very well received. The album release party held at The Whiskey A Go-Go included a guest appearance from Angelo Moore (Fishbone) joining the band in a cover of The Specials’ “Monkey Man.”During the Summer of 2014, the band hit the studio once again to produce their second EP entitled “Slacktivist Swing,” with the help of renowned producer Dave Irish (Reel Big Fish, Suburban Legends, Stupid Flanders). With songs such as “El Jefe De Ska” and “Mario Bros Before Hoes,” this album was a display of the increasing maturity in their sound, including revamped lyrics and flexible musicality.Matamoska’s latest full length album “Skalluminati” was debuted in the Summer of 2017, following a West Coast tour with Las Vegas based Ska-Punk band Be Like Max. This album showcases the diverse musicality of the group, with traditional ska songs such as “El Coyote” to the third-wave ska inspired tune “Grandmaster Smash” to the politically-charged Reggae jam “Reggaenomics.” It also includes a Ska-Punk cover of The Misfits’ hit “I Turned Into A Martian.”On top of rehearsing and writing for the next EP, Matamoska maintains a vast touring schedule, recently returning from several U.S tours and a two-week tour of Europe, which included performances in France, Germany, Belgium, and the Netherlands.– PAUL VERDUGO, 2017